"I like this place, and willingly could waste my time in it." -- Celia, As You Like It, Act II, Scene IV, William Shakespeare 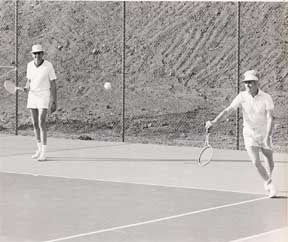 Before its conception, Orindawoods was simply 85 acres of beautiful hillside real estate located on and around Kite Hill. Mary DeSoto owned the land. A group of local boys and girls, including the daughter of club founder J. Gordon Ainsworth, kept their horses on the property. Climbing a water tower, and keeping the fence line in good repair was about all the excitement in the early years. From time to time, tending the property did involve chasing a herd of escaped horse around the Safeway parking.

Over the years, there were several offers to buy the property. The Orinda Association was the governing body for the area at the time (there was no official town of Orinda in those days), and it was able to discourage undesirable developments on the site. J. Gordon Ainsworth served as the liaison to the Orinda Association for the Kite Hill property. Finally the property was sold to a group of investors, Robert Nahas, Jack Marchant and Don Doughty, who served as property manager. They enlisted J. Gordon, who was Tennis Director at Orinda Country Club, to help them with the designing of the courts and setting up the rules of play.

The negotiations to develop the property were intense and drawn out. Many people in Orinda did not want the hillside built on at all, and if it was developed, wanted to be assured that it was tastefully done. The end result of countless meetings was over 40 legal conditions on the construction of the Association and the Tennis Club. The product of these lengthy discussions can clearly be seen in the beauty of Orindawoods today.

The Orindawoods Tennis Club was built in 1973, and opened in the summer of that year. Cut out of the hillside, our spectacular Club offers wonderful views of the East Bay hills. Robert Nahas and J. Gordon Ainsworth, who had become good friends, laid out the courts with plenty of room to play. Unlike many clubs, Orindawoods has full-size championship courts, each individually fenced. Nahas also was the man behind the Oakland Hills Tennis Club, and, on a slightly larger scale, the Oakland Coliseum Complex. Each of our courts are set down in a wonderful bowl that gives great backgrounds for seeing the ball. The bowls also help mitigate the sometimes windy conditions. We do not accept the nickname, Windy Woods. Few members realize that Court One was originally planned to be a stadium court, but the seating was never built.

J. Gordon played here until the mid 1990s, when declining health slowed him down. He passed away in 1997. His wife Harriet can still be seen hitting some balls from time to time. Robert Nahas passed away in 2002.

Of course the Club is just part of the larger Orindawoods Association, who own and operate it to this day. The Orindawoods Association Board of Directors is the governing body for the Club. They provide overall direction to the Club's manager, who handles the day to day operations of the facility. Many residents, past and present have served on the Association Board and left their mark on the development of the Club.

The courts themselves show the many changes to Club through the years. Originally, they were light blue, with a surrounding tan color. That gave way to the traditional dark green on a red background. We followed that up with dark green on light green, or green on green as it is known. Today, the courts are ATP blue on light green, the colors used in most professional tournaments. The blue provides greater visibility, particularly at night under the lights. The original court lights were replaced in 2010, and those lights were upgraded again to LED lighting in 2018. The LED lighting is fantastic, and makes night play a joy! 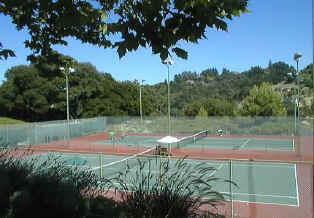 An earlier rendition of courts 2 & 3

Orindawoods has had relatively few teaching professionals in its 30 plus year history. Ron Noon was Tennis Director from 1973 to 1994. Judy Newman Ralela served as director from 1994 until 1999. Keith Wheeler joined the Orindawoods staff in 1995 as the club manager. Since 1999, Orindawoods has combined the manager and tennis director position into one position, Executive Tennis Director, which is held by Keith. Since Keith assumed both positions, we have had four Head Pros, Brad Reiser, John Graham, Patric Hermanson and our current Head Pro, ErikOehlschlager. Patric came to us after 12 years at the Belevedere Tennis Club in Marin County, and served at Orindawoods for close to twenty years. Erik Oehlschlager started in September 2022, after 13 years in soils engineering. He had previously been Tennis Director at Sleepy Hollow. Ron Noon taught for Orinda Parks and Recreation for many years. Brad is a Tennis Pro at MVP, and John Graham has moved on to private industry. Judy currently teaches tennis on a private court in Santa Cruz, California. 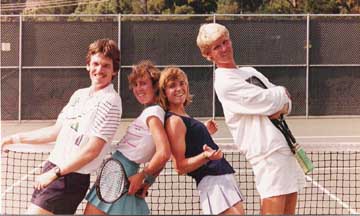 The Club under went major renovations around 2000, under the supervision of Keith and Orindawoods Association President Michael McCollom. We have completely rebuilt six of the seven courts and resurfaced the pool since 1999. These repairs left the Club in top shape for over 20 years. We patch and color the courts every five years, to keep the surface in top condition. In 2021 we added pickleball to Court One.

At Orindawoods, we have a clear view of the future. Our Mission Statement is: The Club is primarily for the recreational enjoyment of the owners and associate members. We strive promote the enjoyment and growth of tennis.

We have a storied past, and a bright future. Come join us!